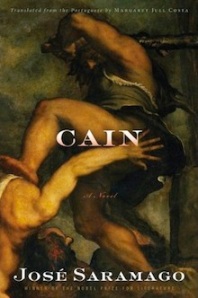 Saramago is a first-person narrator who keeps himself just out the corner of your eye. He’s often funny, and thought-provoking, and delightfully mischievous, savouring the details of his own defiance. Every little barb, every little twist is absolutely deliberate. Translator Margaret Jull Costa carefully holds the thread of his winding sentences, which snake across pages and pages, running right through the direct speech, one sentence sometimes covering entire, fully-realised arguments and half a dozen switches in register, one moment Biblical-stately, the next earthy and idiomatic. The lord is glorious, magnificent, almighty, eternal, splendid, and also just a son of a bitch.

Cain was composed shortly before Saramago’s death last June aged 87. It’s apparent just how his ferocious intelligence and argumentative atheist glee still blazed. And it’s impossible to imagine he didn’t relish the writing of it.

The Cat’s Table by Michael Ondaatje 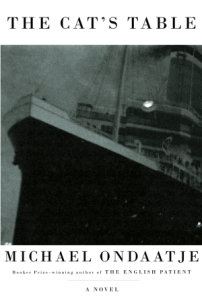 Via The New York Times:

Reading Michael Ondaatje’s mesmerizing new novel, “The Cat’s Table,” is like being guided, just as surely and just as magically, through the author’s lustrous visions. As he did in his great 1992 novel, “The English Patient,” which won the Man Booker Prize and became an Academy Award-winning film, Ondaatje conjures images that pull strangers into the vivid rooms of his imagination, their detail illumined by his words.

In “The Cat’s Table,” Ondaatje seems to lead the reader on a journey through three deeply submerged weeks in his own memory — from the year 1954, when, at age 11, he traveled on the ocean liner Oronsay from Colombo, in what was then Ceylon, to England, a passage that would lead him from his past to his future self. As the novel opens, prominent passengers are granted seats at the captain’s table, but young Michael (nicknamed Mynah) and the two boys he befriends, Cassius (a troublemaker) and Ramadhin (a contemplative asthmatic), are relegated to a table of dubious characters: a mute tailor, a retired ship dismantler, a pianist who has “hit the skids,” a botanist and a lady who hides pigeons in the pockets of her jacket, and reads thrillers in her deck chair, flinging them overboard when they bore her. It’s the pigeon lady who remarks that theirs is “the cat’s table” since “we’re in the least privileged place.”

via The New York Times:

“I was a New England kid, coming out of that world,” [Banks] said, smoking a cigarette on the balcony of his new high-rise apartment overlooking Biscayne Bay. “All of a sudden I could smell the Gulf Stream. There were palm trees, and people who didn’t look like me, sound like me. Half a century later, I still get off the airplane and feel the same rush, that same hit. ”

Mr. Banks is now 71. Burly and white-bearded, he looks a little like Hemingway, if Hemingway could have been persuaded to wear a diamond chip in his left ear. He still speaks with traces of a New Hampshire accent, and when not in Florida he lives in Keene, N.Y., 100 miles from the Canadian border. “I guess I just like the extremes,” he said. “Not the middle.”