I got a chance to talk with Ted Chiang at this year’s NORWESCON. A cool guy and an extremely good writer (his short story “Hell is the Absence of God” remains a story I return to again and again), his new novella, The Lifecycle of Software Objects, will be available soon from Subterranean Press and a reprint of his short story collection, Stories of Your Life and Others, is also due to be released by Small Beer Press.

Ted Chiang redefines how everybody will write about artificial intelligence

Chiang’s longest work to date is pure idea crack. Writing a longer work doesn’t make the award-winning short-story writer spread out his legendary inventiveness and gift for challenging the reader — if anything, he goes into overdrive. The Life Cycle of Software Objects keeps surprising you. Not just in the sense that you think the story’s going one direction, and then it suddenly veers in a new, totally logical, direction. But also in the sense that the story isn’t really about what you think it’s about. New ideas, new ways of looking at the conundrum of artificial intelligence, keep coming up, although they feel as though they’re organic to the story and the characters. 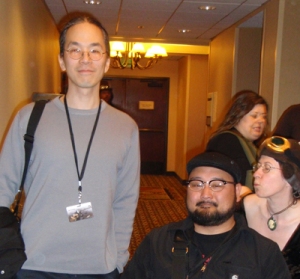 *Ted Chiang, Me, and a Steampunk Photobomber